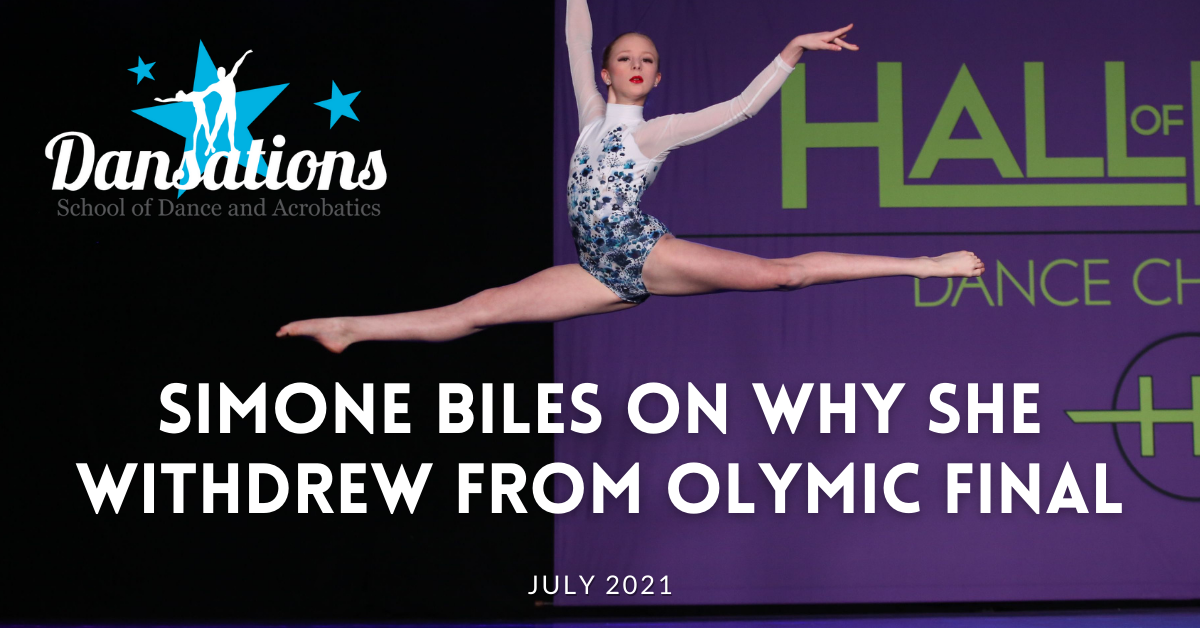 Simone Biles On Why She Withdrew from Olymic Final

By Dansations Blog
Gymnastics Classes for Kids in WNY, Kids Gymnastics Near Me

Here on our blog we love to talk about the world of dance, acrobatics and gymnastics. Remember to follow us on Facebook and Instagram to see all the latest news around the studio! As we enter into the brunt of the world Olympics, we have to touch on what’s going on with the USA gymnastics squad! Remember it’s never too early to start your child in gymnastics or Acro! We offer classes from 18 months to 18 years! Okay back to the news..

Simone Biles is one of the best athletes on the planet, and her recent withdrawal from the olympics has everyone talking. Let’s take a look at what the athlete has to say as we break down why she felt like sitting was better for her team, and herself.

“I just felt like it would be a little bit better to take a back seat, work on my mindfulness. And I knew that the girls would do an absolutely great job. And I didn’t want to risk the team a medal for kind of my screwups, because they’ve worked way too hard for that. So I just decided that those girls need to go and do the rest of our competition.”

Obviously viewers were shocked to see the leader step aside, and with some negative folks calling her out for not finishing, the majority of people are commending her for her strength to be honest about her mental health, and to put her team first. Overall, Biles is reeling from a stressful year and stressful Olympic Games, but physically she says she is okay.

“No injury, thankfully. And that’s why I took a step back, because I didn’t want to do something silly out there and get injured. So I thought it was best if these girls took over and did the rest of the job — which they absolutely did, they’re Olympic silver medalist now. And they should be really proud of themselves for how well they did last-minute, having to [adjust].

Why to Choose Mindfulness

Simone decided to withdraw from the individual competition as well, so unfortunately fans won’t get to see her compete for gold, but real fans are happy that Simone is in a good place mentally. Mindfulness and good mental health are so important to performing at a high level, and here’s what she had to say about what Wednesday’s break could bring.

“Usually you practice mindfulness … we’ll have the morning off, so that’s a great start because you can’t do it in practice because then you’re really focused in and tuned in on practice. So it starts from outside the gym. However, we want to relax. And we’ll do that, hopefully get some fresh air — and we’ll just see.”

Remember to follow us on Facebook and Instagram for all the latest news around the studio and learn about all our new classes and options! Have a question regarding getting your kid into a class? You can fill out the contact form or give us a call anytime! Liza will be happy to address any questions you have and get your child dancing in no time!